MJ completed his Eagle Scout project this past weekend. His project was to rebuild 250 feet of fence at the Lincroft Little League field. The old fence had a single horizontal rail and a top rail made of 2×4. Kids were constantly climbing under or over the fence.  People would get splinters from the old wood.  Plus there were several 4×4 posts that needed to be replaced.
With the rebuild, MJ designed three horizontal rails plus a top rail made of Trex, as you can see in the photo.  The project took two days and involved 155 man hours of labor.  Scouts and friends did most of the labor.

A special thank you to David Seibel for sponsoring the project with the Lincroft Little League and working with MJ through the project. 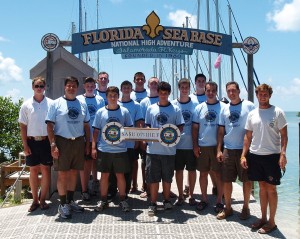 This past summer we travelled with the Boy Scouts to the Sea Base High Adventure Camp in Islamorada, Fl. for a full week of SCUBA diving.  We were there from July 31st to August 7th with 8 scouts and 4 adults.  The scouts were between the ages of 14 and 18.

We did a total of 11 dives during the week.  All the dives were coral reef dives on the Atlantic ocean side of the keys.  The divers were to a depth of 20 to 30 feet.  Water visibility was anywhere from 80 to 40 feet, depending upon the weather conditions.    The scouts got to dive both hard corals and soft coral reefs. 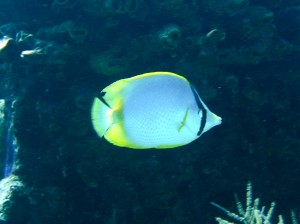 The abundance of sea life was just out of this world.  We got to see tons of reef fish.   Just about every dive we saw at least one barracuda.  On the night dive, we saw the barracuda schooling over the reef. We saw a couple of nurse sharks.  On one dive some of the boys got to see some black tip reef sharks.  The nurse sharks were great.  They were between 5 and 6 feet in length and we were able to swim with them for quite some time.  We saw some grey spotted eels and several moray eels.  On one dive we swam with a sea turtle that was about 3 feet in diameter.

All the scouts and two of the adults had to get PADI certified in SCUBA diving before going on the trip.  The scouts did their certification in May & June.

This summer we’re taking a group of scouts to the BSA high adventure sea base in Florida.  We’re doing the SCUBA adventure program down in the Florida Keys for one week.  The program is awesome.  The scouts get to do 11 dives on the coral reefs in some of the most pristine water. We have 8 Scouts and 4 adults going on this adventure.  The scouts are between the ages of 15 – 18. 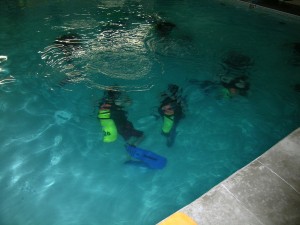 One of the prerequisites is that everyone, adults included, must be certified SCUBA divers.  We started the certification class 3 weeks ago.  The boys have another 2 classes and then the 4 open water dives to become fully certified.  I’ve attended parts of the class and the pool sessions.  It is pretty cool to see how they are progressing.  Last week they practiced out of air emergencies and equipment failures.

The instructor, Tony from Dosil’s, is great.  The man has the ability to teach the scouts in a way that keeps their attention.  He also has unbelievable patience.

A few weeks ago we had the Scouts who are going to SeaBase this summer participate in a Discover SCUBA at Dosil’s Dive Shop.  I’ve always been skeptical about the program and wondered “does anyone really get anything out of it”.  After seeing the Discover SCUBA program I’m hooked.  If you are thinking about getting certified in SCUBA diving, you really should try the Discover SCUBA.

The concerns I had with the Scouts is if they would be able to clear their ears and would they be comfortable underwater.  The program answered both questions for me.  It also lifted the boys spirits and got them excited about this summer’s trip.

The whole program took about 2 1/2 hours.  Tony, our dive instructor, took the boys through a series of drills like clearing their mask, clearing the regulator, how to surface and how to work the buoyancy compensator. After each Scout demonstrated that they could perform each of the tasks, they were allowed to go into the deep end of the pool.

In all told the Scouts were in the deep end of the pool for about 45 minutes.  They are all looking forward to the certification classes which we’re going to begin around the end of April.

We had an excellent day on Saturday skiing at Camelback with the Scouts.  The weather was a very nice 40 – 45 degree day with clear blue skies.  The slopes were loaded with fresh packed powder snow.  The conditions could not have been better.  In fact it very well may have been one of the best days, weather wise, of skiing that I’ve had.

We had 13 scouts join us.  Their skill levels were as varied as it could possibly be.  We had several first timers who tried either skiing or snowboarding.  My son was able to join up with another scout who had similar skill levels.  They took off for the intermediate and expert trails.  I didn’t see the two of them for about two hours.  The first time skiers were able to pick up enough skill so that by the afternoon they were able to come down the easier trails from the top of the mountain.  We had one bad incident where one of the boys took a bad fall and injured his shoulder.  He tried to get some air over a bump and caught the edge of his board.  He landed on his shoulder.  if it wasn’t for this one injury, the day would have been perfect.

Since we were a group, we were mostly in the lower Sun Bowl lodge.  It was the first time I was in this lodge at Camelback.  The food there was nothing to write about, but the parking and accessibility.  Wow.  I was parked within 75 feet of the lodge.  Had I known how close and accessible it was, I would have packed a cooler.

The one memorable fall was with my friend Dave.  He was wearing black ski pants and a blue jacket.  We were making our way down the bottom part of the run when a newbie girl came down the hill and lost control.  She came right behind him, interlocking her skis with his and giving him a great big hug.  All I saw was this black, blue and pink blur with snow flying.  After the fall, she bounces up all bright & bubbly and says “Oh my bad, so sorry” and skis off.  Mean while, Dave is a crumpled pile on the ground trying to figure out what just happened.  As he recovers and we regroup, I’m thinking “Gee if you were so sorry, why didn’t you help the guy up”.  Of course I had more colorful language at the time.  This is one of the drawbacks to skiing in the Poconos.  Due to the close proximity of the city and the suburbs, there are a lot of people  on the slopes who just can’t ski. They think that just because they can survive getting down the mountain that they don’t need lessons.  Oh, if only Vermont wasn’t so far away…..

In December I completed the Wilderness First Aid that is offered by Solo (Stonehearth Open Learning Opportunities).  This was in preparation for the Philmont trip in June/July.  The adults needed to be certified in Wilderness First Aid, so we would have the background to handle any issues that occur while we are in the back-country.

What a fun course!  It has been a number of years since I took a first aid course.  Wasn’t sure what to expect, but I was not expecting the course to be so interesting.  With the focus being on the back-country, where medical services are typically hours away, the course covered topics that is normally left for medical professionals.  Restoring circulation for a broken limb, de-crumpling a person who has fallen  and learning about clearing a head-neck-spine injury were some of the topics we covered.

I have to say that the course really boosted my confidence to be able to handle the situations we may face while we’re in the back-country.  If you every have the opportunity to take a wilderness first aid course, even if you are not a outdoors type of person, there is a lot you can learn.

Last week we took the Boy Scout Troop up to Ten Mile River Scout Camp. What an amazing time! In addition to the boys working on the merit badges, we also did a lot of other activities such as the polar bear swim, high cope course, mountain biking, repelling and barbecuing. The kids had an amazing time. They earned a ton of merit badges.

If  you are involved in Scouting, but have not yet gone to Summer Camp, it is a very relaxing week. It was very nice to have a few hours each day where there was absolutely no demands and you could sit back, chill out. The fact that cell phones either didn’t work or were very spotty (depending upon your carrier) was an added bonus.

The weekend of May 17th & 18th, we took the BoyScout Troop up to Alpine Scout Reservation.  Alpine sits just north of the GW Bridge on the Palisades.  We had a great turnout and the weather was picture perfect.

We had a good time climbing the rock climbing wall.

MJ finally got thehang of building a fire.  This was the last requirement he had to complete to qualify for his Second Class rank.

So early in the month of April, Dave & I were busy getting the Troop’s trailer ready for the Turkey Swamp camping trip. Here’s a picture of the inside with the shelves. At the rear of the trailer we decided thatdrawers would really help organize us with the repair kits, extra parts and the small stuff we need to support the troop during a camp-out. We also decided to custom size the shelves for the gear in order to maximize the space usage. The right hand side of the trailer we left open, so that we could put the tables and bear box in. With the tables on the right hand side, the weight of the trailer is very close to being equally distributed between the wheels.

Here is a close up of the drawers that I made. With the Scouts being a rough as they are, I thought having the drawers made with finger joints would help them stand up to the abuse. Plus the finger joints look really cool. I was able to use the finger joint jig that I made a few years ago. The jig runs on my table saw and controls the spacing. The jig fully adjustable, so it take a bit of effort to get the spacing just right. Once you do, the joints come out looking great.

Our Winterburg campout was a success! We took the troop up to Forestburg Boy Scout Reservation this past weekend for an overnight campout. The entire troop slept out in tents on the snow! The boys had a great time. We hiked down to the nearby waterfalls. The boys went sled riding.

Ok, so some of the adult leaders went sled riding as well!!

We did have a small cabin to cook, eat and get warm in. However we choose to sleep outside in the 15 degree weather for the night. When you a prepared for the cold, it is quite comfortable to sleep on the snow.

The stew we had for Saturday night was very tasty. Especially after being in the cold for most of the day. Sunday’s breakfast, we tried to use a Dutch Oven to cook up Taylor ham and Eggs. Took over an hour to cook and it eventually turned out ok. We have to re-think cooking breakfast in a Dutch Oven on our next campout.