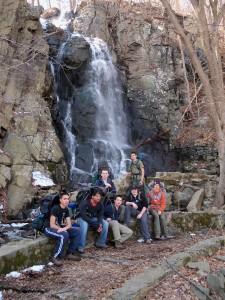 This past Sunday the Philmont crew went on a day hike on the NJ Palisades. The Palisades are a cliff face between the George Washington Bridge and the Tappen Zee Bridge.  The cliffs are about 600 high.  The hike traversed along the base of the cliffs right next to the Hudson river and then climbed to the top and followed the cliff edge back to the starting point.

We started the hike at the Palisades Interstate Commission Office by Exit 2 on the Palisade Parkway.  The weather was great.  Temps were in the 50’s, skies were clear blue. 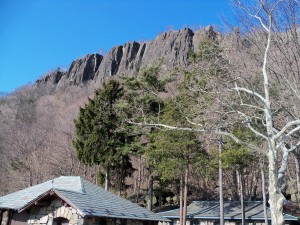 Along the base of the cliffs there was absolutely no snow.  The trail took us through the public boat launch, which was closed this time of year.  At a trail intersection we had a 20 minute “packs off” break.  While at this break we studied the map that we had with us to make sure we “knew” where we were.  The map we had was very poor.  But the thinking was we couldn’t get lost because we were right next to the Hudson river.  Bad thinking.

Turns out that the intersection we had our break at was the intersection we should have taken to get back to the top of the cliffs.  Instead we continued along the base of the cliffs heading north.  We came to the giant steps, which we mistakenly believed led back to the top of the cliffs.  Instead the giant steps was a massive boulder field with rocks the size of cars and trailers.  The giant steps were leaps to the next rock.  This field of boulders was about 3/4 of a mile long and took us 1 1/2 hours to cross.  Also along the path the recent storms toppled dozens of large trees across the trail.  There were places that we had to pass the backpacks to each other so we could climb over and under the obstacles.  It was great to see the crew really working together to overcome the challenges.  The teamwork was excellent!! 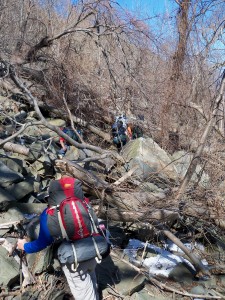 We went about another mile before we realized that we made a mistake.  At that point we had 3 more miles moving forward or traverse back through the mess/maze of trees and rocks.  The crew elected to continue forward to the waterfall and then climb up the cliff face.  All in all this slight navigational error added 5 miles to a 7.5 mile hike.

As we made our way to the top of the cliffs, the snow gradually became deeper.  At this point we were all tired.  The snow made the progress all the more difficult.  When we reached the Lookout Inn, I went and bought a real set of maps for the trail.  Yes, it was after the damage was done, but the maps will come in handy on future hikes.  We ended up hiking back on Route 9 heading south to avoid the snow and allow us to get back to the cars at a reasonable pace.  As it was originally we thought we would be done by 1pm.  Instead we completed the hike around 3:30pm.

If you haven’t hiked along the Palisades, I would highly recommend it.  The views were spectacular, both from the base of the cliffs and from the top.  I would also highly recommend you plan to follow the trail through the giant steps and by the waterfall.  Our navigational error took us through some awesome scenery and resulted in a hike that was adventurous! If we had stayed on our original plan, I sincerely believe this hike would have been a mediocre, less than memorable hike.  I would also suggest you use a real map and not a guide book 😉

In December I completed the Wilderness First Aid that is offered by Solo (Stonehearth Open Learning Opportunities).  This was in preparation for the Philmont trip in June/July.  The adults needed to be certified in Wilderness First Aid, so we would have the background to handle any issues that occur while we are in the back-country.

What a fun course!  It has been a number of years since I took a first aid course.  Wasn’t sure what to expect, but I was not expecting the course to be so interesting.  With the focus being on the back-country, where medical services are typically hours away, the course covered topics that is normally left for medical professionals.  Restoring circulation for a broken limb, de-crumpling a person who has fallen  and learning about clearing a head-neck-spine injury were some of the topics we covered.

I have to say that the course really boosted my confidence to be able to handle the situations we may face while we’re in the back-country.  If you every have the opportunity to take a wilderness first aid course, even if you are not a outdoors type of person, there is a lot you can learn.

We had our first Philmont shakedown hike last weekend. The whole Monmouth Council Contingent of 90 scouts, 20 advisor’s and more than 20 staffers travelled up to Stokes State Forest on Friday evening. On Saturday the boys packed up all the tents and loaded up our backpacks. Our crew was somewhere in the middle of all the crews in getting out of camp in the morning. It took the boys an hour and 15 minutes to break camp.

We hiked 10 miles up to theAppalachian trail and over to the fire tower. The boys did well physically. Most of the backpacks were in the 40lb range weight wise. Although the packs were not balanced correctly and there was a lot of loose gear on the outside. So we do have to work on the skills to pack a backpack. One of the games Frank & I were playing is to guess who would lose a piece of gear next.  Along the trail we had to stop several times to re-strap on someone’s sleeping bag or tent.

The crew really enjoyed getting to the fire tower. At the fire tower we had our lunch and enjoyed the overlooks. We saw a single hawk riding the thermals while we ate.

Getting back to camp, we were the second crew in. Both Frank and I were amazed. We didn’t think we hiked at a breakneck speed. Being 2nd into camp gave us time to setup the tents and relax before we had to start cooking dinner. All the food we ate was Philmont style food. That is to say it was dehydrated backpacking meals. For the most part the food was good.

Saturday night it rained like hell. One tent the scouts pitched in a small depression. All the rain water collected in their tent. Suffice it to say this is a self correcting problem. The scouts whose tent is was will definitely take more care in setting up their tents in the future.

Overall the shakedown was a success. The boys got a good taste for backpacking and what will be expected of them in the coming months. Next Sunday, 10/11 we’re going to take a day hike to get the crew together and stretch the legs.

Saturday I joined several other Adults for a 10 mile hike through Stokes State Forest.  This was part of a shake down hike for the adult leaders in preparation for Monmouth Council BSA going to Philmont Scout Ranch next year. Our goal was to make sure all the trail markers are clearly visible and that there are no surprises on the trail.  This fall we will be taking the Scouts over the same trails for their shake down hikes.

The hike was through some amazing scenery in the North Western part of New Jersey.  The wild blueberries are in season.  A few of us enjoyed an extra snack on the trail.  For lunch we decided to rest at the pavilion on Sunrise Mountain.  We even had some luck in our timing.  As we were enjoying a brief rest and lunch, we watch a heavy rainfall pass over us from the neighboring valley and move out into the next valley.