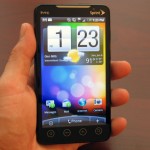 After 18 months my Droid died. The front touch screen stopped working. It was very frustrating to not be able to answer incoming phone calls. I was also frustrated by Verizon. With my original contract long expired and the fact that I had three phones with them, they would not give me any kind of deals for a new phone. Verizon wanted me to spend more than $150 on the phone itself and enter into a 2 year contract that would cost me $180 per month.  Plus the current deal they were offering only provided one phone with data and had a 5Gb limit on the data plan.  Verizon wanted $60 to add a second phone to the data plan.

I had the complete opposite experience with Sprint.  First, they converted all three lines from Verizon to Sprint and provided for free new smart phones for all of us.  Second, the family plan they put us on provided unlimited data, messaging and mobile-to-mobile for all three phones. We also had a 1500 minute per month call usage when not dialing mobile-to-mobile.  With our current dialing usage for all three phones, it is a very heavy month when we use 1000 minutes a month, with most of the usage coming from me.  Third, they bought back my broken Droid and MJ’s cell phone.  Cathy’s cell phone was so obsolete, for a moment, I thought they might pay me to dispose of the phone myself.

Between the conversion credit for moving the three lines, plus the buy back of the old phones, we essentially get three months of service for free.  Total cost per month for all three phones to have the data plan, including taxes….$160 per month.

Talk about a no-brainer.

I ended up with the HTC EVO 4G.  MJ went with the EVO Shift.  Cathy was dragged into the 21st century, getting a Samsung EPIC.