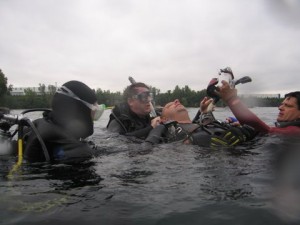 Recently I completed the PADI Rescue Diver Certification.  I’ve been wanting to take this course for quite some time.  In taking the Scouts to the Florida Sea Base I had really wanted to have this certification before the trip.  While I ended up taking the certification after the trip, at least I was motivated to make it happen. 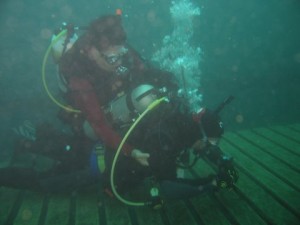 To complete the course we had to demonstrate all the skills in open water.  The most challenging scenario was to find a missing diver.  We had to perform an underwater search to find our “missing” diver, which was a blue fin weighted to stay on the bottom.  Once we found the “missing” diver, the fin turned into a real diver, Mike.  There were three of us acting as “rescuers”.  We had to bring the unconscious diver up from a depth of 55 feet.  Then we had to start providing rescue breaths and get him out of his diver gear. We had to tow him into shore all the while providing rescue breaths.  After we successfully carried him onto the grass, Mike magically turned into CPR Annie.  Joe and Patrick, the other two students, started CPR while I got the O2 started.  After this scenario, all three of us were physically drained.