We arrived in Guadeloupe on Saturday, July 4th. Guadeloupe is a chain of Caribbean Islands in the lower Antilles, part of the West French Indies.  It is actually on the South American continent.  The kids can boast they’ve been on 4 out of the 7 continents.

We flew out of Philadelphia and had a transfer in Miami.  The flights were very smooth and on time.  We landed in Point-A-Pitre about 20 minutes earlier than expected.  The first thing we noticed is the immigration and customs procedures are very European.  The islands are very French and the euro is the currency.  I told Cathy this is not a vacation, its going to be an adventure!

Our resort is in the town of St. Francois on the island of Grand Terre.  It is about a 45min drive from the airport.  The second thing we noticed is the 2 main islands are much larger than we originally thought.  Its a solid 2 hour drive just to cross from one end of Grand Terre to the other side of Basse Terre. 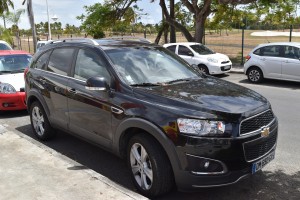 We rented a car for the week, which always adds  adventure.  It s a small Chevy Captiva with a manual 6-speed transmission.