Thursday, Sept 6th marks the day we began our journey back home. To get home we had to take 3 flights. The first leg was on a ATC-72 Turbo prop plane with Blinter Canaries to get to Gran Canarie Island. The turbo prop plane was a very modern, fully digital aircraft. The second leg would take us from Gran Canarie to Madrid and then the final leg to JFK on Iberia airlines. We had a 20 hour layover in Madrid. So I booked a hotel room and planned a day around the old portion of Madrid. 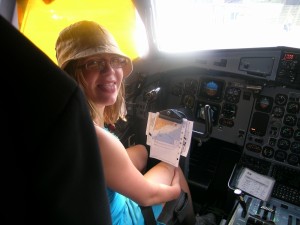 As we boarded the Turbo prop, the pilot heard that he had Americans on board. He quickly came out of the cockpit and found Jill & I. Turns out he was planning a trip to New York and wanted to pick my brain on what to do and what to see. In turn Jill got to sit in the pilot’s seat with the co-pilot taking her through all the controls. I was very impressed with Blinter Canaries airline. It is a small airline catering to the Canary Islands, but the planes are very new and the staff is very professional.

The flight to Gran Canarie and then to Madrid went without a hitch. When we got to Madrid, we had our first travel problem to deal with. Both mine and Cathy’s checked luggage didn’t make the transfer in Gran Canarie. We found ourselves in Madrid with our bags still in the Canaries. We almost made it through the trip with no major problems!

Of course I made everyone pack thier carry on luggage with the remaining clothes to get all the way home. The Iberia rep was able to quickly locate our bags, they were already tagged for the next flight in the morning to Madrid. I had the rep ship the bags to our house, so we wouldn’t lose the day trying to track them down. As it turned out our missing bags crossed the Atlantic on the flight before us. Both bags were waiting for us in the JFK terminal before clearing customs. The Iberia flights across the Atlantic was as comfortable as you can be for a 7 1/2 hour flight in economy. The planes were nicly kept and the flight attendants very good. I would fly Iberia again if the need ever arises.