While in Guadeloupe, we had rented one of the largest cars that you could rent.  It was a Chevy Captiva.  As in most European vacation destinations, the car had a manual transmission.  Over the course of the week, it had come up in conversation a few times that MJ should really learn to drive stick. 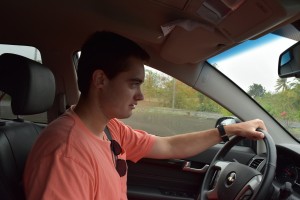 After Flyboarding, as we were driving back to our resort, we didn’t have anything really planned.  I spotted a large empty parking lot.  I pulled into the parking lot with everyone asking me “What are we doing?”, “Why are we stopping?”.  I stopped the car and looked at MJ and simply said “Get Out”.  He looked at me and said “Really??”

Hey we were in a different country, the rules of the road were similar to the US, but the customs and signage was different.  We were using a rental car with the whole family there to watch.  What could go possibly wrong?

After 20min of him bumping and grinding the gears, he began to get the feel for the clutch.  Although several times I had to instruct him to “ride” the clutch when starting out.  He had a mental block and tried to treat the clutch like the brake or gas pedal.

The whole time we were in the parking lot Cathy didn’t say a word.  When I felt he had gotten comfortable with starting the car, up-shifting into second and down-shifting, I told MJ to take the exit from the parking lot.  All of a sudden Cathy had a lot to say.  “Oh, wait!”, “I’m in the car!”, “You’re not going to have him drive in traffic!!”.

I had MJ drive us the remaining 20min to the resort.  He popped the clutch a few times and once had cars behind him honking.  I just had him pull over and let everyone go by us.  We did get safely to the resort.  Both Cathy and the car survived.