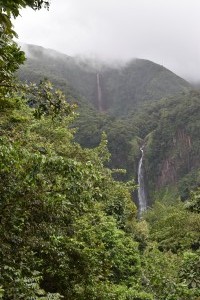 The actual volcano is not reachable by the general public.  The thermal vents can be reached by a very arduous trail from the other side of the park. 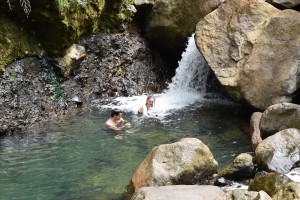 As we hiked to the lower falls, the kids decided to take a brief swim in one of the many pools.  The water was very cool relief from the 90 degree heat and 74% humidity.

The drive to the starting point of the hike was an adventure all by itself. The road was considered a two lane road, but was wide enough for one small European styled car.  It was windy and very steep.  At several points I had to floor the gas and ride the clutch to get the car to move up some of the steep grades.  Adding to the adventure, there was really no signs pointing the way, no guard rails and several hair pin turns that turned everyone’s knuckles white.