One of the jet skis has been having engine problems.  Initially the engine was very hard to start.  It would turnover easy enough, but wouldn’t fire.  After cleaning the carbs, the engine would start, but then it would backfire and stall.  After backfiring and stalling twice I though I  would pull the top end apart to see if something was wrong. 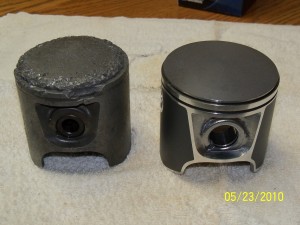 Well, it turned out that one piston threw a ring.  The piston and cylinder walls were torn apart pretty bad.  As you can see the left piston is a total wreck versus the new piston that is replacing it.  Fortunately the crank shaft was in great shape.    So I m now rebuilding the top end of the engine.  The engines in the skis, because of the beating they take, are designed to make top end rebuilds pretty easy.  I bought the top end kit from SBT.  Their kit includes the cylinders, pistons, rings, wrist pins, bearings and gaskets.  While I was replacing a good portion of the engine I decided to rebuild the rest of the ski.  I’ve replaced all the fuel and water lines. Putting in a new starter.  Installing new wear ring and impeller on the jet pump. 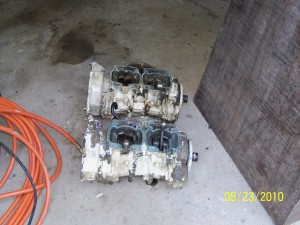 I also had a seized engine that came from my “parts” ski.  Since I was pulling one engine apart, I decided to take a shot at pulling the seized engine apart.  The one cylinder / piston came apart easily enough.  The seized piston one ended up coming out in pieces.  Once I had 1/2 of the piston removed, the rest finally pulled away from the cylinder wall and fell apart.  In the photo I have both engines with the top end off each.  With a little effort I think I can get the seized engine back together working. 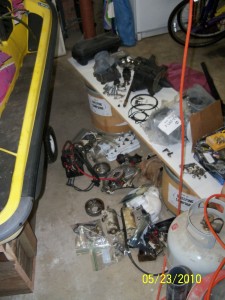 Of course it is  little bothersome to see one of your favorite toys in pieces on the garage floor.  But with a little luck it’ll be back in the water shortly.