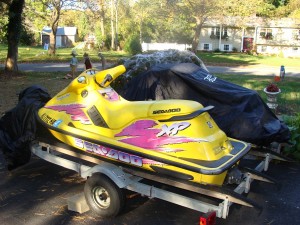 Saturday it was beautiful here on the Jersey Shore.  The temp was in the 70’s with blue sky.  I decided to work on the one Jetski.  I still have the engine apart because of the cracked water jacket.  I have two new water jackets with the exhaust manifold all ready to go on.  Cylinders are all honed.  I cut the rave exhaust valves to clear the pistons.  Everything was all set.

As I was setting the water jackets on the lower half of the engine, I let one piston slip and hit the exhaust baffle.  Boop went a piece of the ring on  the one piston.  Damn.  Now I’m waiting until March 20th when the new rings should arrive.  After the incident I decided to replace all the rings in the engine.

After I messed up the piston ring, I decided to replace the VTS motor.  This is a small electric motor that raises and lowers the angle of the jet pump.  The old motor had died and the case was corroded.  It was easy to replace.  Now I have to wait to finish getting the engine back together before I can test the VTS motor.

I fully expect to have both machines back into the water before this month is over.  I’m just very frustrated with myself for being a damn klutz.